Ultra-immersive, long-form video games from the past or future

As our technology and understanding of nature improves, we are living longer, and many predict that this trend will continue to the point that humans will become nearly immortal. When confronted with the possibility of living for hundreds, thousands, or even millions of years, most people express several concerns: "Will I still be able to retire at age 65?", and "Won't that get boring after a while?"

Fortunately, technology is also improving it other areas (and not just more deadly weapons). Video games, for example, are getting quite sophisticated. As the graphics and other interfaces improve, video games become increasingly immersive and involved, and we begin to feel as though we are really inside the game. As this trend continues, will we get to the point that the games feel so real that we become completely immersed and forget about the outside reality?

So what will million-year old people do to manage their boredom? Perhaps they will play long, complicated, multi-player, fully-immersive video games. If your regular life lasted millions of years, occasionally spending a hundred years playing some fancy game might seem reasonable. Perhaps you would play-out your character's entire life span, from birth to death, in one "sitting". In order to really feel the experience and keep the game authentic, you would of course make it so that everyone playing would forget that it was just a game (though maybe some people would try to cheat).

The obvious question: Is that the future, or the past?

Once we eliminate the certainty of our perceived reality, then how can we justify our certainty of anything else? Accepting true reality, whatever it may be, requires letting go of everything specific.
Posted by Paul Buchheit at 7:27 PM

Unless you happen to be really great at everything, it's very important to build a well matched team of people who have complimentary skills and can work well together. Unfortunately, that's much easier said than done, and most startups really struggle to find the right people. That's why I'm excited to announce another great addition to the FriendFeed team. Check out my post on the FriendFeed blog to understand why this is a big announcement.
Posted by Paul Buchheit at 1:01 PM

Apparently Facebook will ban you (or at least Robert Scoble) if you attempt to extract your friend's email addresses from the service.

Automated access is a difficult issue for any web service, so I won't argue with their decision -- it's their service and they own you.

However, when I signed up for Facebook I gave them my Gmail address and password, using their find friends feature: 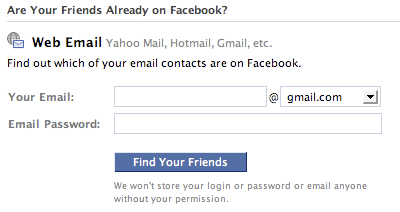 It was very helpful -- I didn't think that I would know anyone on Facebook, but it turns out that I knew hundreds of people.

However, Gmail's Terms of Use seems to prohibit this:

You also agree that you will not use any robot, spider, other automated device, or manual process to monitor or copy any content from the Service.

You agree not to access the Service by any means other than through the interface that is provided by Yahoo! for use in accessing the Service.

In using the service, you may not:
...
Use any automated process or service to access and/or use the service (such as a BOT, a spider, periodic caching of information stored by Microsoft, or "meta-searching")

So the question is, should Gmail, Yahoo, and Hotmail block Facebook (or close the accounts of anyone who uses Facebook's "friend finder") for violating their Terms of Use?
Posted by Paul Buchheit at 5:23 PM